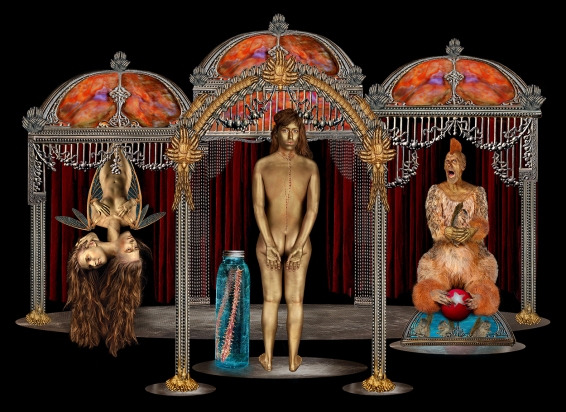 The Temple of Wonders

I once read that the general audience spends on average four seconds looking at each artwork in a gallery, museum or exhibition setting. My initial goal, then, would be to inspire at least ten…… ten time-worthy, compelling, provocative seconds….seconds enough to slow the viewer down and create a small hole in the crush of the everyday that opens onto a world of reflection.

I believe that at its best fine art is an exposed earnest statement that takes risks, pushes boundaries, inspires reflection and encourages discovery. For me much of the joy of making art is the attempt–––drip by drip––to reveal the truth of the image. I’m not interested in creating work for which I already have the answer.

I believe that art is a mediation between that which exists and that which is imagined, a swinging pendulum between reason and intuition, an act of expression that affirms our existence.

I believe in the power of stories. I am a storyteller.

“The Temple of Wonders” (the series)

I had polio as a child and developed epilepsy as an adult. Somewhere in between I suffered a cardiac death and traveled­­–––floated, really–– through a corridor of light only to joyfully reach my destination and be told the bad news, “ Go back. We’re not ready for you yet.” I use a machine to help me breathe when I sleep, my shoulder is held together with screws, my jaw is wired together in multiple places, I have a device implanted in my body to regulate my heart, and I recently had a hip removed and replaced with titanium, chromium, and polyethylene. Is this normal? Am I normal?

“The Temple of Wonders” asks: Who, or what, is normal? Where does it begin and where does it end? And what of the body: Did I betray it or did it betray me? Or both? Or neither?

Much like the circus sideshow my photographs acknowledge the physical embodiment of human anomaly and psychological aberration at its furthest edge. With their hyperbolic exaggerations, blends of the real with the artificial, and their promises of the impossible they seek to provide manifestations of absurd worlds at the extremes, clearly off the norm.   As such, they represent a montage of the authentic and the invented, an assault on the senses that is perfectly suited for manipulations at the margins and, in particular, photographs of the body. And in this carefully crafted environment a body with its gold painted armor can survive almost anything. It’s only the psyche that’s at risk.

I should also note that my work owes a large debt to the photographs of Charles Eisenmann, a 19th century studio photographer who specialized in thoughtfully dignified portraits of sideshow performers, Edward Kelty, a Manhattan banquet photographer of 1920’s East Coast circuses, and the brilliant artifice and exaggerations of the dime museum huckster, marketing genius, and circus owner P.T. Barnum. It was his over-the-top hybrid realities in combination with the somewhat gruesome photographs of the stapled flesh from my hip-replacement surgery that served as the final inspiration for this ongoing body of work.

The physical wounds ––the stitching, the stapling, the scars––– are actually mine. The psychological pain belongs to us all. 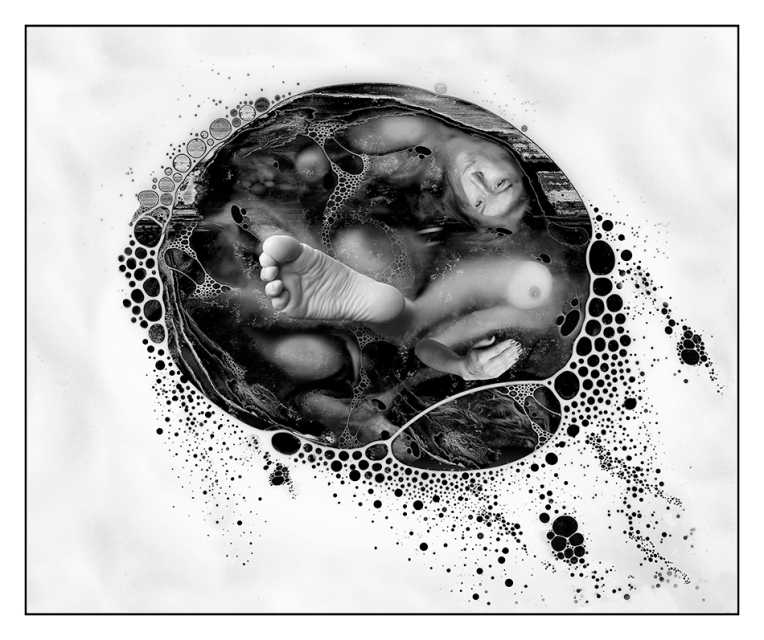 I’m a storyteller and this is the story behind the piece, Cauldron.

For thirty-five years I made my photographs with my own handmade cameras. All my work was traditional film based photography and until three years ago analog photography was all I’d ever taught. I had no digital experience.

I currently teach art and photography at Bowling Green State University. A couple of years back there was a last minute scheduling change and I was confronted with the dilemma: either cancel our Digital Hybrids class or teach it myself. Never having done any digital photography whatsoever, no Photoshop, no Light Room, the reasonable solution was to cancel. However, as I looked at the course roster I saw that it was packed with some of the best students in the School of Art. I’d worked with many of them before and they were an exceptional group. I figured if I couldn’t teach them anything about digital imaging, they surely could teach me. In fairness, I wrote them a letter warning them of my shortcomings but no one dropped the class.

I’ve been a working artist for forty years, and although my technical skills were less than desirable, I had endless ideas about methods for inputting and combining imagery. My first assignment asked students to scan objects or images that emphasized transparency and then combine them digitally with photographs to produce hybrid images. The piece, Cauldron was originally an example for the class that demonstrated the possibility of such a method. It was one of my very first digital images.

Technically, the photograph was nothing more than scanned water-based paint montaged with a lens-based image. Conceptually, I think of this piece as having to do with origin, emergence, transformation, rebirth, or the process of becoming whole. These themes run throughout all of my recent work, which for three years­ has been exclusively digital photography.

And the postscript to this story: I get emails from many of those same students who have looked at my recent website and have expressed disbelief at how far my digital work has come. For me as an instructor, it doesn’t get much better than that.

Pinhole and Work from Alternative Cameras 2006-2010

As an artist my primary goal has always been to create magic with my artwork and to serve as an intermediary between the physical world, the world 0f  existential illusion and everyday life. For thirty years my work has examined the edges of alternative photographic approaches. From my earliest clichés-verre to my pinhole photographs to my more recent combinations of digital montage, I have developed  image and object-making systems that exploit photographic perception and reinforce the ambiguous character of my narratives.

I am a writer of fiction, and my stories— my photographs— reflect the idea that frequently there is a better description of truth in fiction than you can find in documents of the phenomenal world:  The Mouth as Signifier of Status and Host for Pleasure and Pain.  Animal Investigations in the Name of Science.  Lack of Love on Foreign Soil.  Big Jars of Teeth Launch Careers.  Alleged Infidelity of Parents and What To Do About It. The narratives themselves represent fantasy masquerading as reality and emphasize an absurd world filled with the contradictory and inexplicable messages that bombard us daily. In this manner my work tends to function more like the irregular spray of a shotgun shell rather than a well-placed bullet. It moves in the general direction of my aim, scatters in the name of expression, and if I’m lucky, hits something.